Manchester United are ‘close’ to sealing a £70 million deal for Lazio’s Sergej Milinkovic-Savic, according to reports in Italy.
Reports indicate that United have ‘relaunched’ a bid to sign Serbia playmaker to replace Paul Pogba who has been linked with Real Madrid and Juventus.
United are reported to leading the race ahead of PSG to sign Milinkovic-Savic, who have also shown interest in the midfielder.
‘Sergej’ will reportedly be in for a salary of 6-7 million euros a year if he joins the Reds, although reports in England claim United have not interested in the player and that his agents could be behind the speculation to raise his valuation.
United are yet to launch any bid for the player and the reports emanating from Italy could be just rumours,” said a source.
United are currently in China for their pre-season tour and earlier overcame Tottenham 2-1 to win their fourth successive matches in the pre-season.
Anthoney Martial struck in the first half to give United the lead before Lucas Maura equalized in the second half with a deflected effort.
It was academy graduate Angel Gomes who scored late in the game to give the Red Devils a deserved victory. ​Having joined Zenit St. Petersburg this summer, Malcom’s tenure as a Barcelona player lasted just the one season. Ouch.

Signed from Bordeaux for a reported £36m, the 22-year-old was deemed to have much promise, having scored 12 goals and assisted a further seven in 32 starts in Ligue 1, all from a wide position.

However, the Brazilian failed to make an impact in Spain, scoring just once for the club before being shipped off to Russia.

Inspired by the move – as well as Philippe Coutinho’s potential departure, albeit a loan – here’s a list of seven expensive signings who flopped and were swiftly moved on elsewhere. A £60m signing from ​Real Madrid in 2017, Alvaro Morata was expected to replace the goals of the departed ​Diego Costa, who returned to Atletico Madrid having just helped ​Chelsea win their fifth Premier League title, scoring 20 league goals in the process.

Instead, the Spaniard scored just 16 goals over 18 months as the Blues failed to secure Champions League football. Having not settled in England, ​Morata was loaned – made permanent this summer – to ​Atletico, joining Costa in escaping Stamford Bridge. Back in 2014, ​Manchester United paid Real Madrid £68m for Angel Di Maria, who had just enjoyed a fine campaign with Los Blancos, starring as the club won the UEFA Champions League.

United had just sacked David Moyes, appointed Louis van Gaal, and believed that splashing the cash for star players would return them to the summit of the Premier League.

Alas, the Argentine failed to endear himself to the Old Trafford faithful, struggled to adapt to English football and was subsequently sold to Paris Saint-Germain the following season. ​Liverpool decided to pay ​Aston Villa £42m for Christian Benteke in 2015, having witnessed the powerful Belgian score 42 goals in 82 starts in the Premier League since his arrival three seasons prior.

However, the target man struggled to adapt to Liverpool’s style of play, which involved the ball on the floor and pressing while out of possession. Jurgen Klopp’s arrival in October was the beginning of the end for ​Benteke, who scored just nine goals for the Reds. Having been a prolific goal scorer for Porto – 67 in 90 games – Atletico paid £37m for Jackson Martinez in 2015, hoping that they had found another incredible marksman set to follow in the footsteps of Fernando Torres, ​Sergio Aguero, Diego Forlan and Radamel Falcao.

Rather, the Colombian scored just twice before being shipped off to China the following February, with Atletico somehow making a profit on their misfiring striker. With only six months of regular top-flight football under his belt, Liverpool paid £36m for then-21 year-old ​Andy Carroll, who had bagged 11 goals in 18 starts for ​Newcastle at the start of the 2010/11 season.

With the mere six goals in the following 18 months, Carroll departed for ​West Ham, initially on loan and then permanent the next summer.

Fortunately for Liverpool, the England international was acquired to replace the outgoing Torres alongside another man who fared just a bit better – a certain ​Luis Suarez. 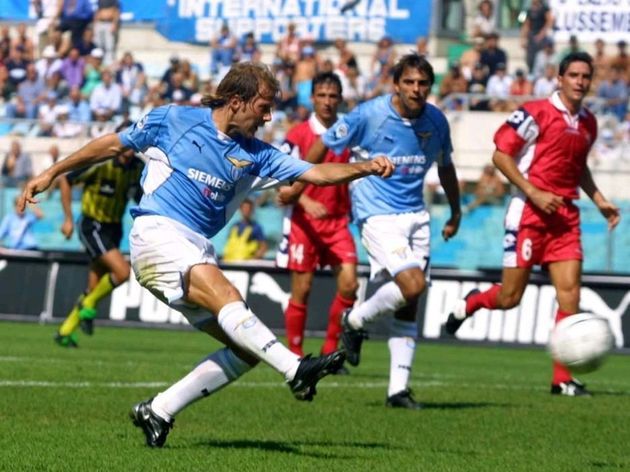 Known in England for his spell at ​Middlesbrough, Gaizka Mendieta set Lazio back £43m when he arrived from Valencia in 2001 – a staggering fee at the time.

In Italy, however, the Spaniard struggled to capture his best form, failing to score a single goal for the club. He was loaned to ​Barcelona the following season before heading to Middlesbrough in 2003, initially on loan and then on a free transfer in 2004, in what was a massive financial loss for Lazio. A controversial selection, certainly, given Zlatan Ibrahimovic’s pedigree, as well as his respectable goal record at Barcelona, which stands at 19 goals in 31 games.

However, not only did Barcelona pay £42m for the Swedish international, they also gave ​Inter legendary forward Samuel Eto’o, who proceeded to win the treble the next season under Jose Mourinho.

Zlatan was gradually replaced by ​Lionel Messi, who increasingly preferred to play central, and was loaned out to ​Milan the very next season, before joining the Italian giants permanently.