Kenya’s hopes of making it into the second round were restored after beating East Africa neighbours Tanzania 3-2 in a thrilling derby at the June 30th Stadium in Cairo on Thursday night.

‘Engineer’ Michael Olunga scored twice, once in either half as Kenya came from behind to grab the massive three points ahead of the final round of group matches next Monday.

Olunga scored with nine minutes left after Johannah Omollo had brought Kenya level at 2-2. Saimon Msuva had given Tanzania a fifth minute lead before Olunga drew the sides level in the 39th minute.

The celebrations in the stands from Kenyan fans had not even gone down a decibel when Samatta restored the lead for the Taifa Stars. Samatta banged the ball between Kenya keeper Patrick Matasi’s feet after drawing him off his line to give Tanzania a 2-1 lead five minutes to half time.

Kenya had equalized just a minute earlier through Olunga’s overhead kick after keeper Aishi Manula had made a mess off handling a freekick from Ayub Masika and the ball hung around the area nicely for Olunga to volley home.

It was a fiery, fast paced derby with both teams knowing only victory would keep their hopes of remaining in Egypt longer alive.

Tanzania got into business early and opened the scoring in the fifth minute when Msuva had the easiest of tasks to tap the ball home from close range after Matasi had spilled a venomous shot from Samatta.

From then on, it was Kenya who pulled in the pressure. In the 13th minute, Erick Ouma came close when he volleyed home from close range but his shot flew straight to Manula.

Kenya came close but were twice in succession denied by the bar. Ouma’s corner was smothered onto the bar by keeper Manula before Olunga rose to the rebound and his header again went against the woodwork. 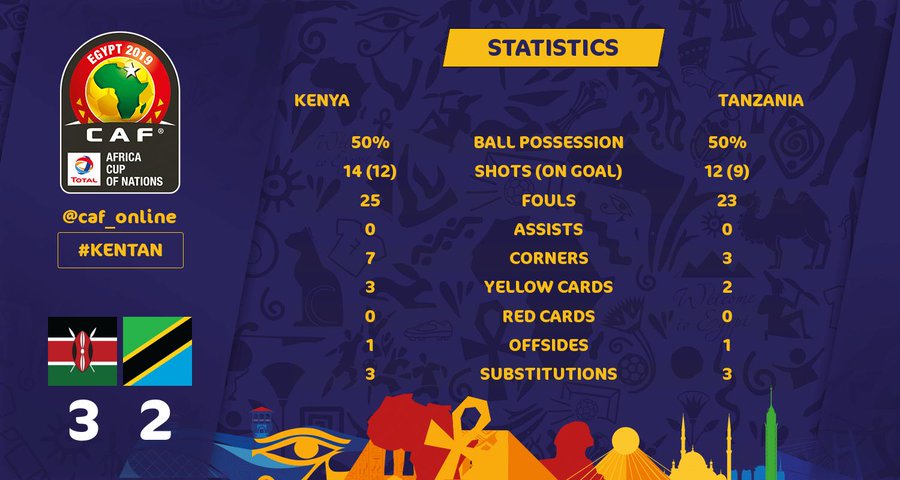 Tanzania had a chance on the other end in the 36th minute when Ramadhan Kessy’s freekick from range almost beat Matasi who was off his line, but he tracked back to tip the ball over for a corner.

In the second half, Kenya came with renewed vigor and Victor Wanyama forced a save off the keeper with a header from a corner in the 59th minute, Just two minutes later, Kenya was level when Omollo sneaked in at the near post to head in Masika’s cross.